November followed last year’s pattern in basking (contrary to previous years) with an up-tick in turtles appearing on the beach from last month. There were 55 basking occurrences compared to 46 in October.   This was our most active November since 2012 when there were 64 basking occurrences recorded.

We were up 9 appearances from October (46), and our increase of 20 over last November managed to put us 75 basking occurrences ahead of last year at this time.  In fact, with the November numbers, we’ve hit 700 for the year, a frequency not seen since 2014 when there had been 713 for the year.

In November there were 7 days when no turtles graced our shore. This number is down from the prior 2 years when we were absent turtles on 9 days in 2018 and 22 days in 2017.

During November there were 11 different named turtles that hauled out to bask.  That is the same as last month but 2 more than last November. This month we had no unidentifiable turtle visits.

Our “top 4” baskers for November were Punahele with 10 appearances, Makana with 9, and Kaimana and Kekoa with 7 each.

November had multiple turtles out 16 different times with November 24th experiencing the greatest exodus from the water with 5 different honu hauling out onto the beach on that day. Nine (9) of our 12 month “top ten” baskers appeared on the beach in October. Overall, Hiwahiwa, Olivia-Dawn, Kekoa, JP, Maka Nui, Punahele, Makana, Kaimana, Keoki, Wooley-Bully and HILAHILA graced our shore with their presence.  Yes, Hilahila made an appearance for the first time in over a year (15 months!).

This month, Punahele took over the top spot in basking over the past 12 months!

History of Basking at Laniakea

On the Ides of March, 1999, a solitary male green sea turtle hauled himself out of the ocean at Laniakea Beach to bask in the sun. Later named Brutus by Malama na Honu, he is part of the vanguard of a relatively small number of sea turtles that, for reasons yet to positively be determined, come out onto dry land to rest and get warm.

Individuals from no other species of sea turtle or any of the other 10 “discrete population segments” of green turtles (Chelonia mydas), engage in this activity in the same way it happens in Hawaii.  These turtles crawl out of the water of their own volition.  Turtles in a couple other places sometimes find themselves washed up onto shore by wave action and stay on dry land for a period of time before returning to the water, but apparently nowhere else do male and female adults, as well as subadult and juvenile turtles purposely exit the water because they themselves have decided to do so.  The sight is incredible!

Over the ensuing years, more green turtles (Honu in Hawaiian) have found their way to this and many other beaches in Hawaii.  Their presence on these beaches has become a legitimate tourist attraction. At Laniakea alone, over a half million people come to the beach to view these turtles basking each year.  This puts the turtles in jeopardy of being harassed and tormented by unthinking humans.

Subsequent to Brutus’ initial foray onto the beach, by 2003 there was a total of 9 honu venturing onto land (besides Brutus (m) there was Hiwahiwa (f), Sapphire (f), Olivia-Dawn (f), Isabella (f),

Malama na Honu came into existence in late 2007 as a successor to a George Balazs initiative at NOAA called “Show Turtles Aloha” and “officially” took charge of recording, monitoring and protecting a total of 19 basking honu. (Punahele (f), Nohea Kamakana (m) and Kuhina (m) had joined the group by then.)

For 9 years, the `ohana at Laniakea had grown steadily but 2008 saw tragedy strike.  Pukalani was apparently taken by a tiger shark at the nesting grounds at the French Frigate Shoals in the Northwest Hawaiian Islands and humans maliciously butchered Honey Girl as she peacefully basked overnight on the beach.  Although Laniakea lost 2 turtles in 2008, Kaheka, a subadult, was added to the rolls to bring the basking total to18.

2009 saw one new turtle choose the rocky shelf area at the southwest portion of the beach to begin basking.  It was large enough to be an adult female so it was named ”Clawdette” for the claw shaped bite apparently taken out of the left rear flipper by a tiger shark.   Clawdette though, was large for “her” age and a late ”bloomer.”  After disappearing from the beach for over a year at the end of 2012, this turtle returned in March of 2014 with a long thick tail! The honu was quickly renamed Keoki (George in Hawaiian).

In 2010, 3 new turtles began their tenure at Laniakea, Kekoa (sub), Kulihi (m) and Hao`okanaka (sub).  Hao`okanaka was originally named “Ironman” for famous surfer Andy Irons who tragically died that year. When it was discovered that the turtle was a female, the name was shortened to ”Hao” or “iron” to preserve the honoring but make it gender neutral.  At the end of 2010, the `ohana was at its most populous point with 22 actively basking honu.

Beginning in 2011 the population began to thin out. This year saw 2 turtles leave Laniakea to bask elsewhere (Nohea Kamakana and Squirt…though Squirt stopped by for 20 minutes, we assume by mistake, in January 2014).  Mahina appeared for the last time in July 2012, Scallop in November 2013 (after being treated by a NOAA veterinarian for severe injuries from a boat strike), Brutus in April 2014 (which really affected our overall basking numbers because he had basked with extraordinary frequency—sometimes 24-25 days a month), Genbu in June 2014, Kuhina in March 2015 and Kaheha in June 2015. Those losses would have left the group with only 14 active baskers, less than the number that were gracing Laniakea with their presence 10 years before.

Fortunately, 2015 also began a resurgence in new baskers. That year 4 new turtles, all sub-adults or juveniles, began coming ashore between March and June.  JP, named for Joanne Pettigrew, the founder of Malama na Honu, first appeared in March, Hilahila in April, Kaimana in May and Kaipua in June.  Two years later in 2017, Makana (juv) joined the group and Maka Nui (juv), Big Eyes in English for its demeanor when it first appeared on the beach, began hauling out at Laniakea in August 2018.

As of the beginning of 2019, there are 20 turtles actively basking at Laniakea, 5 adult males, 8 adult females, 5 sub-adults and 2 juveniles.

Overall basking totals for 2018 for the Honu `Ohana were the highest since 2014, the last year our champion basker Brutus was still in residence.

Our “top ten” individual baskers for the past 12 months were

...and the bottom 3 of those actually hauling out during the year: 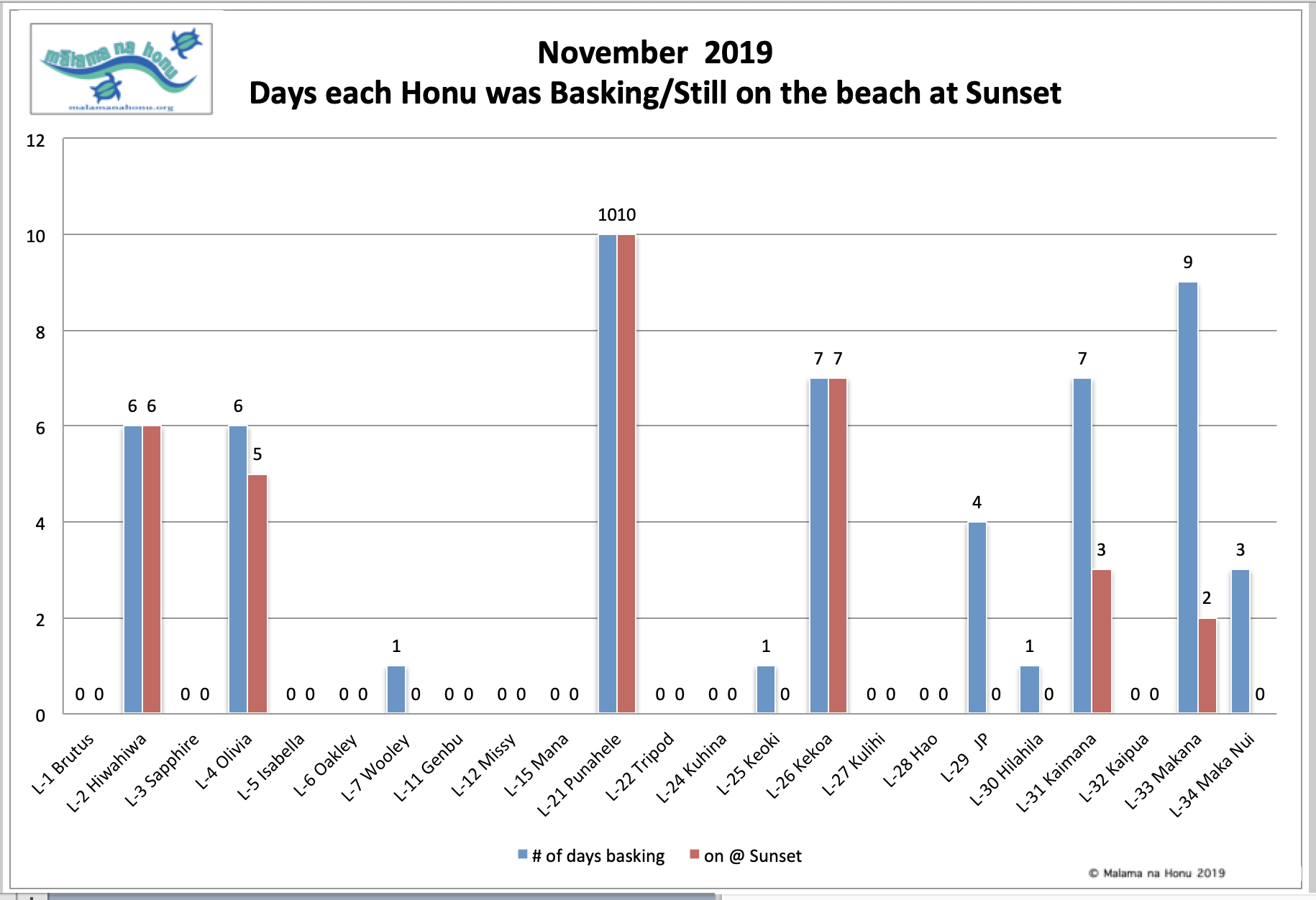 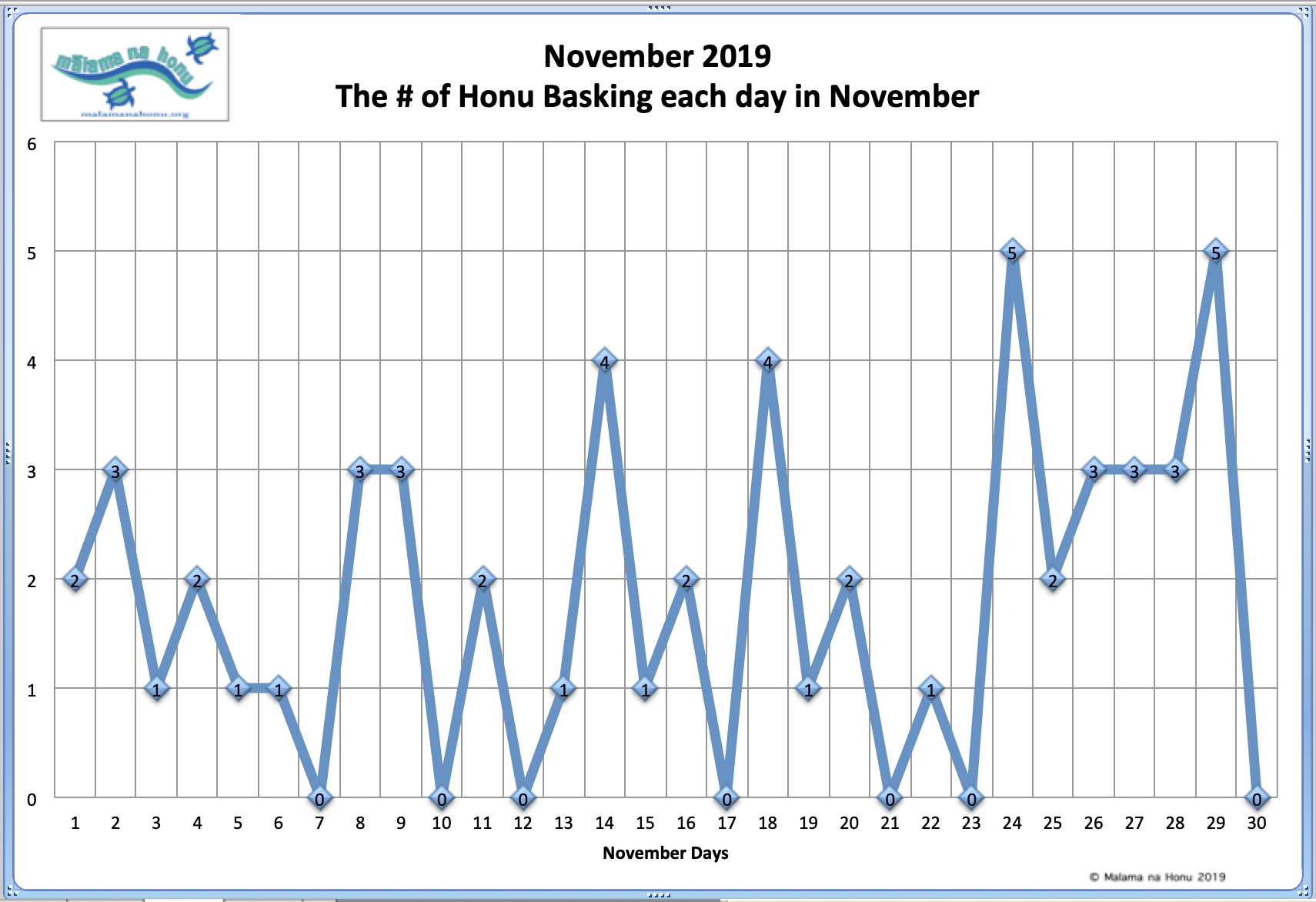 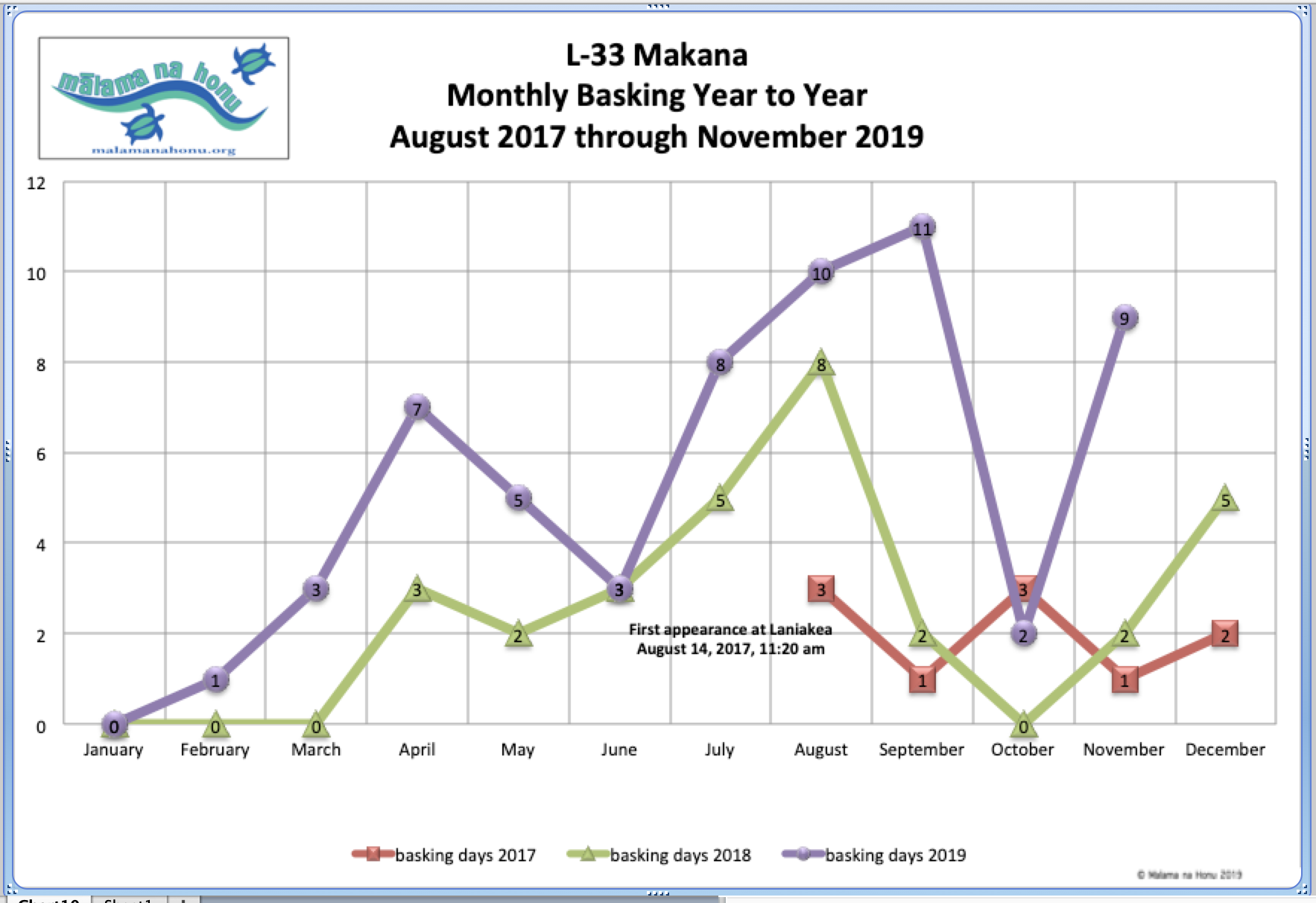 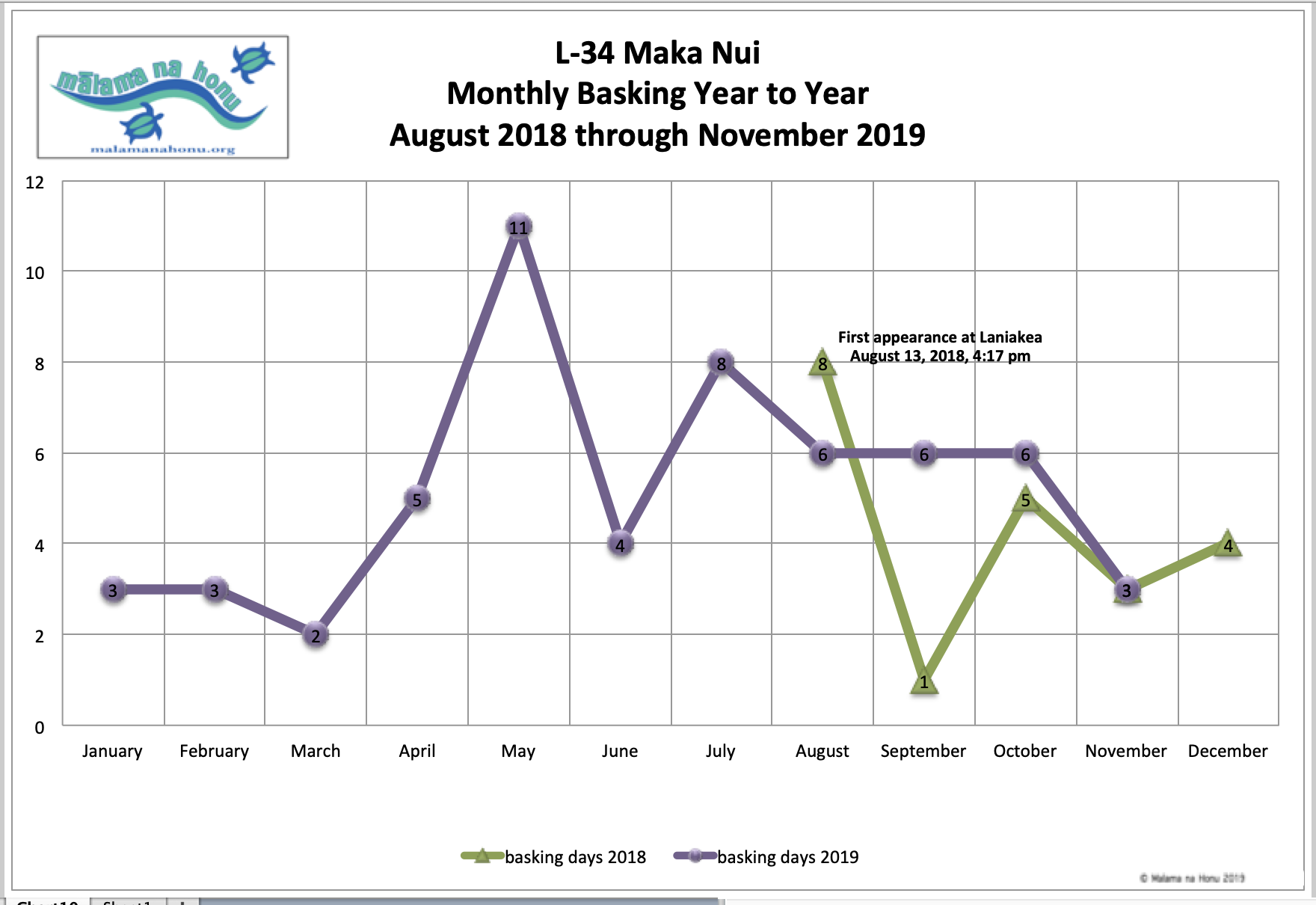 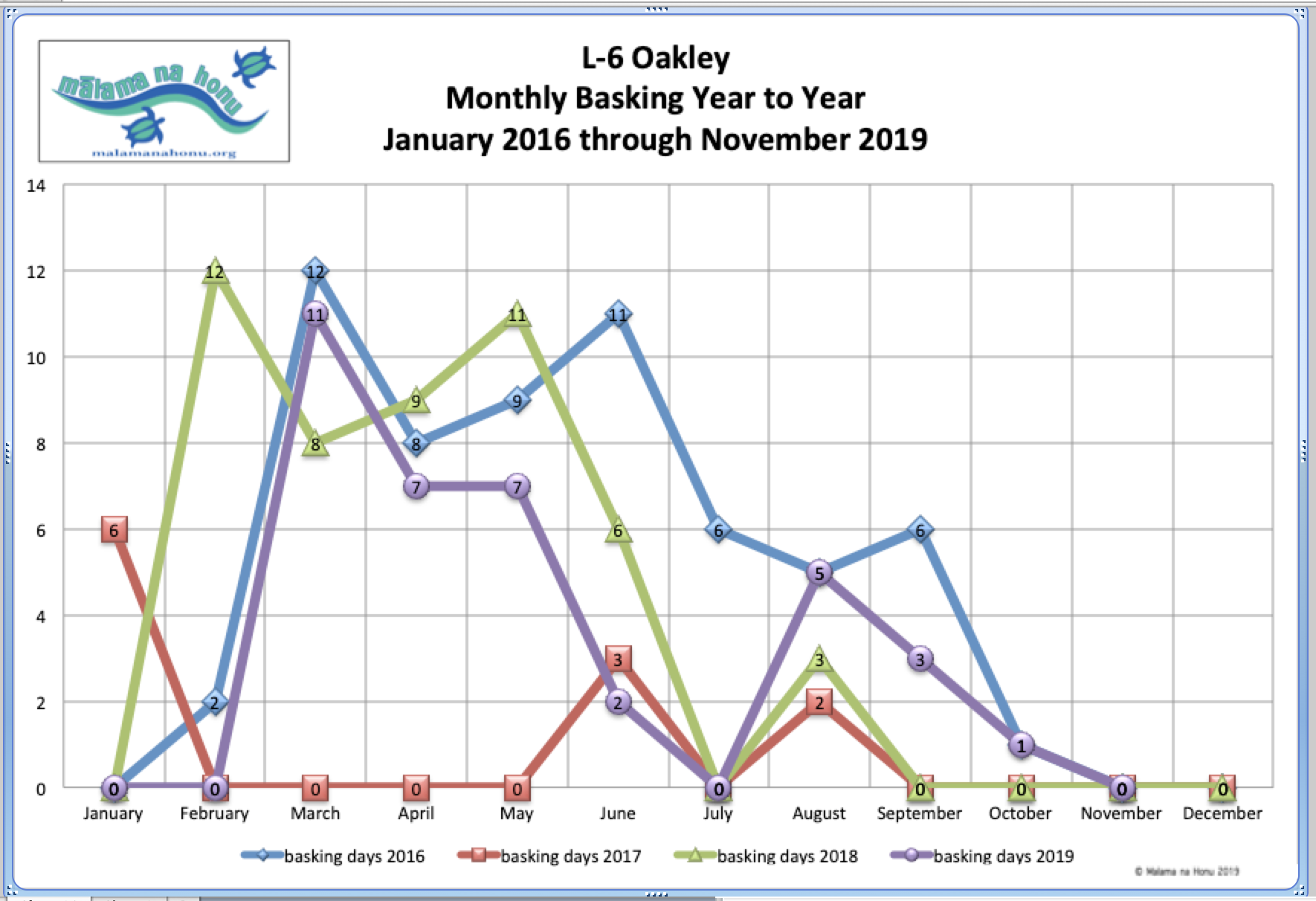 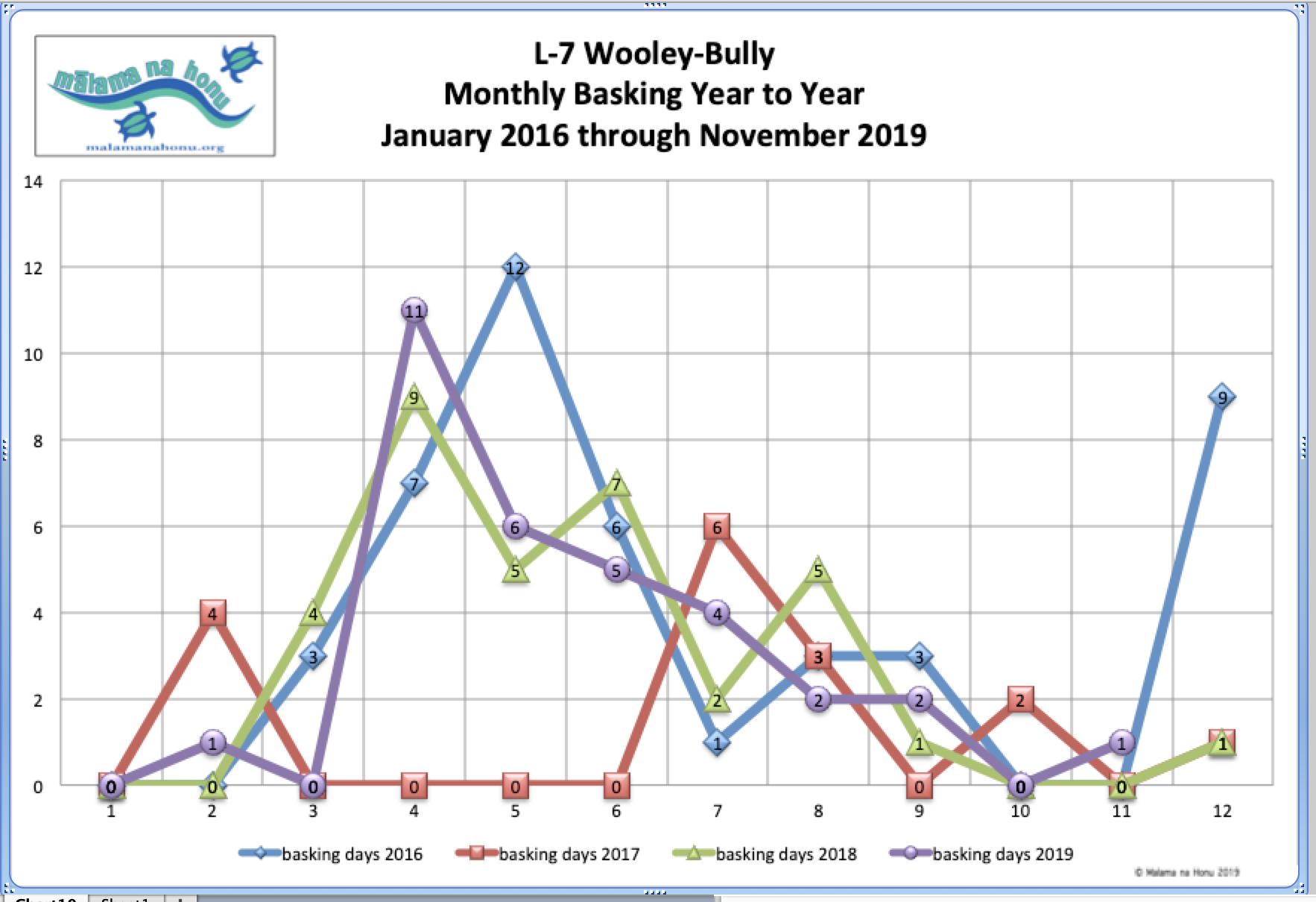 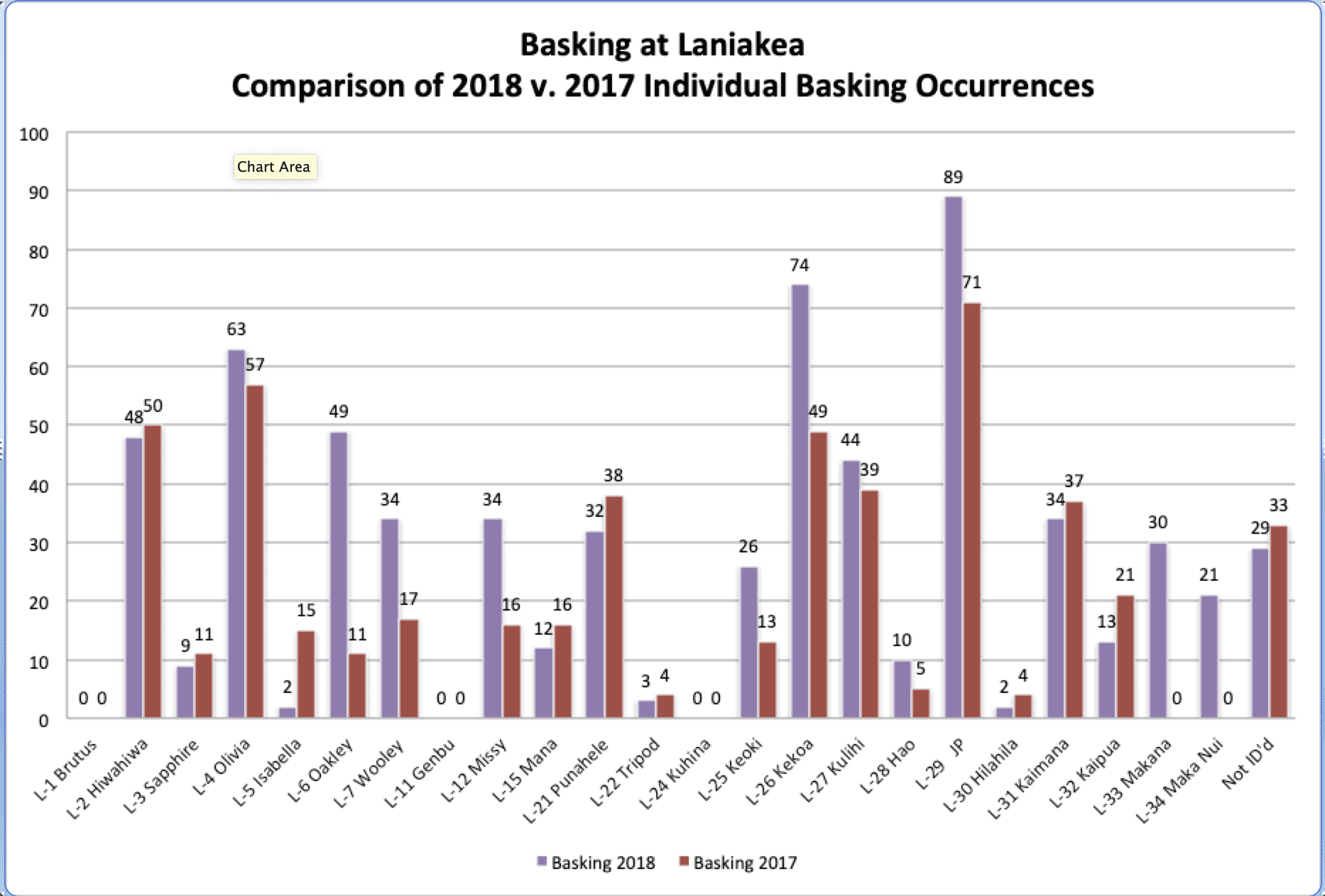 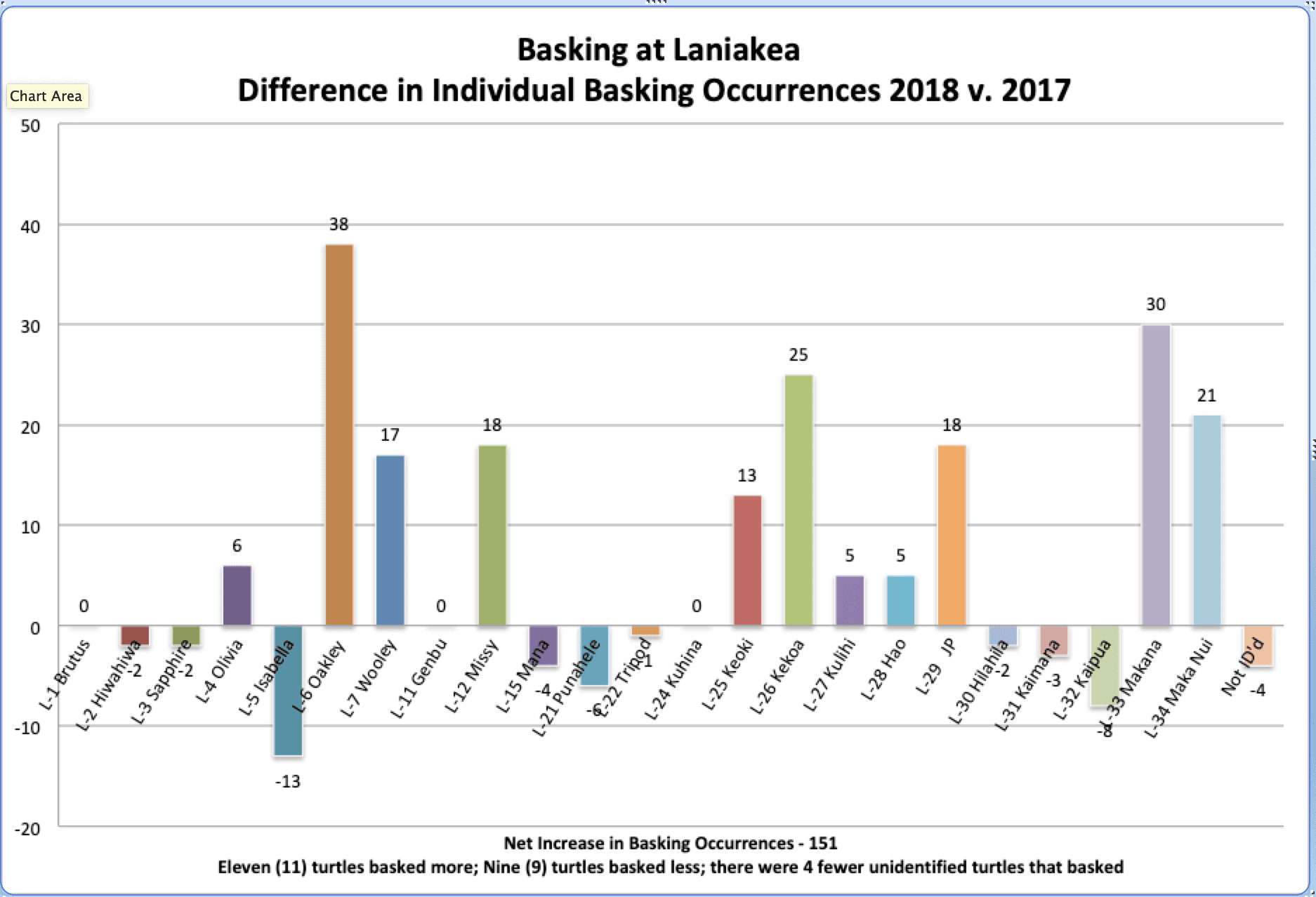 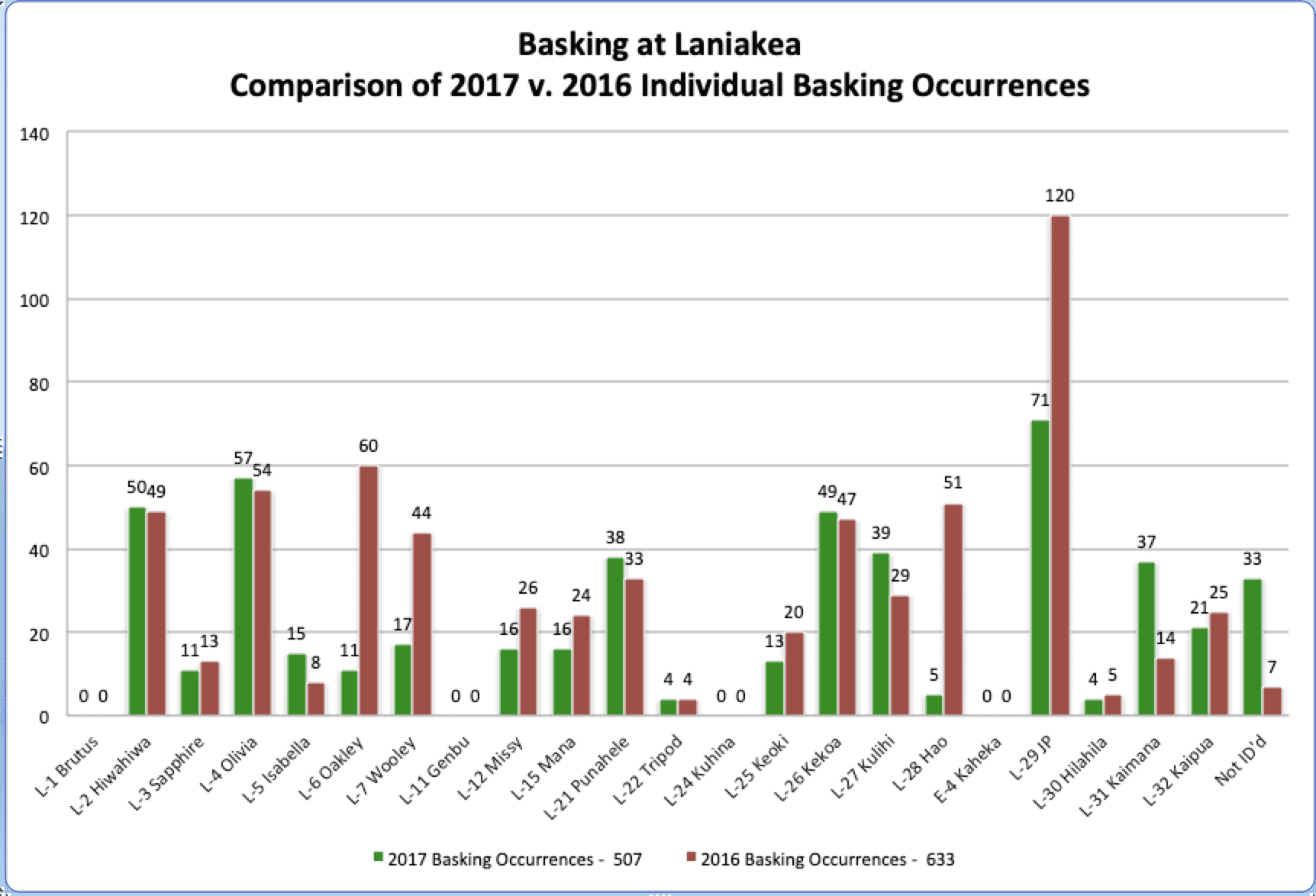 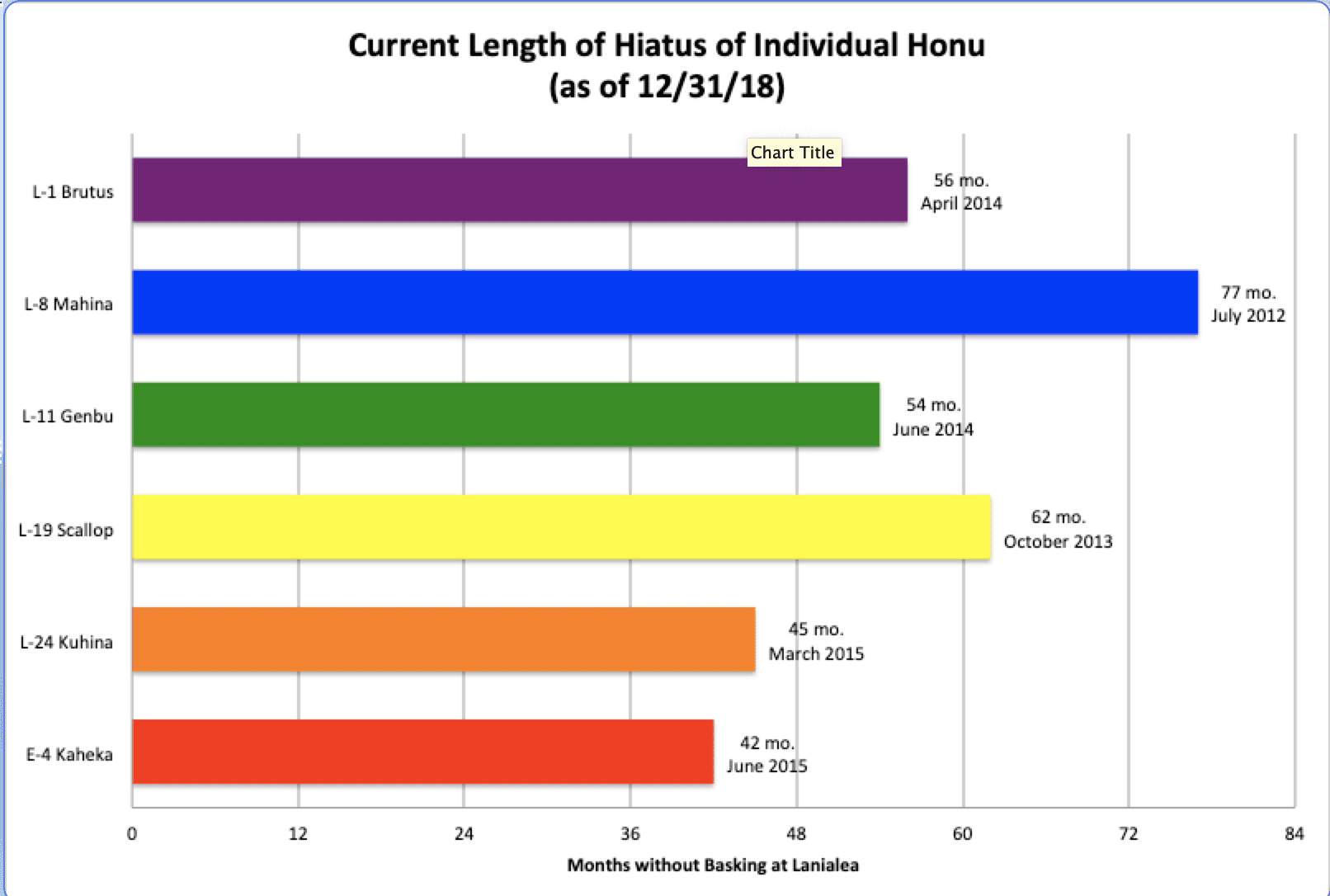